May 5, 2020 By Graham Seal in slang Tags: Francis Grose, slang Leave a comment 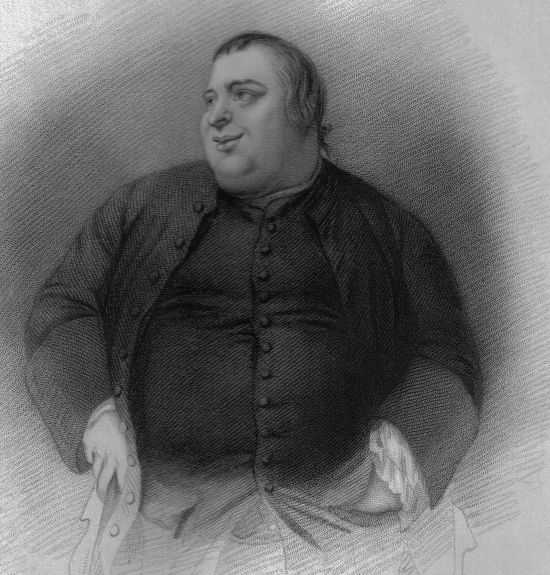 Captain Francis Grose, antiquarian, some-time soldier and all-round roisterer used his knowledge of lowlife to compile a dictionary of eighteenth-century slang. Assisted by Tom Cocking, Grose frequented and enjoyed the fleshpots of London, eating, drinking and taking notes of what was said and by whom. The fruits of this devoted study appeared only three decades after Dr Johnson’s famous dictionary but, unlike that great work, documented the unofficial, earthy and bawdy language spoken by the workers of the era.

Grose was so fat – a gundiguts, according to his own dictionary – that his assistant, Tom, had to strap him into bed each night to make sure he didn’t roll out. But he was an apparently amiable man who was able to move easily in different social circles, putting his inquiring mind to good use wherever he went and with whoever he met. His encounters included one with the Scots poet Robert Burns, who contributed prose and poetry to one of Grose’s many antiquarian works on castles and other ancient buildings.

Not only does A Classical Dictionary of the Vulgar Tongue (1785) present a vast number of raffish and often amusing words and phrases, but it also gives some idea of those who spoke them. Many of these were criminals who, as in earlier and later periods, found considerable use for linguistic obfuscation. Others were those who followed more or less respectable trades and occupations. Grose’s dictionary is crammed with the speech of thieves, beggars, prostitutes, soldiers, sailors, gamblers, cockfighters, horse traders and a range of other dodgy operators.

Duck fucker man in charge of poultry aboard a war ship

Knight of the rainbow – a footman, from the gaudery of his apparel

A maggot-boiler was a tallow merchant

Nimgimmer a doctor, especially one able to treat venereal diseases

The dictionary includes multitudinous names for different kinds of alcohol, especially gin and is also good on insults, including Captain queernabs, a shabby ill-dressed fellow; Dicked in the nob meaning silly, crazed; a dog booby is an awkward lout and Just-ass was a punning name for a justice [judge], an official who many of Grose’s speakers often encountered.

A few of the words and terms immortalised by Grose and Cocking are still in use today, including screw, to copulate; bum fodder for toilet paper and to kick the bucket, meaning to die, which Captain Francis Grose did in 1791. His legacy is a magnificent compendium of everyday talk that people used as they went about their business, whether that was respectable or otherwise.

Oh, and a cackling fart is an egg and tallywags are testicles.