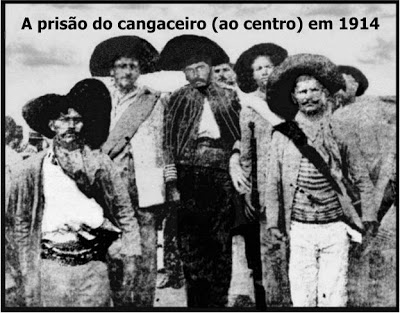 Faked, but Silvino’s head is on the middle body

Brazil was colonised by the Portuguese in the 16th century. A strong sugarcane economy developed along the coast, while the more arid interior was largely ignored until land was required for food to feed a growing population. The serteao or ‘backlands’ were then opened up mainly for beef ranching on large landholdings. Over time, these were increasingly broken up into unviable smaller holdings through the inheritance system, a situation that formed the economic basis for the banditry that became endemic to the backlands. Other factors included the ongoing series of disastrous droughts between 1887 and 1919, together with the weakness of law and order throughout the backland states.

From the 1870s until the 1940s, Brazil experienced a form of rural banditry known as the ‘cangaço’, a term meaning the yoke of oxen, possibly a reference to the bandits’ habit of carrying rifles slung behind their necks. Endemic in the spare and arid northeast of the country the cangaço was characterised by armed bands of men who roamed the countryside robbing farms and travellers, sometimes abducting them for ransom, extorting from local businesses with ‘protection’ rackets and even invading regional cities. The cangaçeiros, as these bandits were known, were led by men to whom the gang members pledged loyalty unto death. Many of these leaders achieved notoriety and even celebration as outlaw heroes, including Jesuíno Brilhante, Adolfo Meia-Noite, Sinhô Pereira e Luiz Padre and Antônio Silvino.

Manuel Batista de Morais was a member of a respected ranching family with a history of cangaçeiros activity. This included the Robin Hood figure of the early outlaw hero, Jesuíno Brilhante, and that of Manuel’s great uncle, Silvino Aires de Cavalcanti e Albuquerque, who eluded the authorities for a quarter of a century. In 1897 Manuel murdered two men in revenge for his father’s death. Revenge murders were a common element of backland society. These were a product of the exaggerated sense of personal and family honour mixed with machismo that characterised the culture, aggravated by perennial disputes over land tenure and ownership of stock, a common frontier tension point that also played an important part in American and Australian outlawry. These murders meant that Manuel became a cangaçeiro and he joined his great uncle in the bandit life. After Silvino’s eventual capture in 1899, Manuel took his great uncle’s name as his own bandit pseudonym and also took over as leader of the gang that he had once commanded.

Good-looking, strong and an expert marksman, ‘Captain Silvino’ as he was popularly known in standard outlaw style, operated until his betrayal in 1914. He was known during his time as a ‘gentle cangaçeiro’ who mostly robbed the rich, including the British-owned Great Western Railway Company that became a major feature of the backlands economy from 1900. His raids on this enterprise were widely, if probably inaccurately, regarded as attempts to defend the backlands from the incursions of yet another colonising power. He was careful to distribute some of his booty amongst the poor, he righted wrongs related to boundary and domestic disputes and was usually seen to be scrupulous in respecting the honour of women.[i] Like many successful outlaws he was careful to maintain his image as a noble robber, both in his more public actions, such as burning the captured mailbags of the Great Western Railway, and in his considerable and considered dealings with the press. His legendry included a supernatural ability to disappear and reappear in order to escape pursuers. He was also portrayed, and largely seen as, a friend of the poor, as a contemporary newspaper account put it:

‘… he protects the people, the anonymous masses with whom he divides his pillage and in whose bosom he does his best source of support … . He does not dishonour families and he has a mania for harming the public authorities …’[ii]

After his capture Silvino was imprisoned, spending the next twenty-three years in gaol. He was pardoned in 1937 and given a government position, returning to the Paraíbo backlands, where he died in 1944. Despite his unromantic post-outlaw life, such had been his fame as a cangaçeiro that his Robin Hood legend continued during these years and developed further after his death, celebrated in cordel – small, cheap and very popular booklets –in ballads and in Brazilian oral tradition. He was also the subject of romanticised fiction and popular biography until at least the 1960s.[iii] Perhaps the most surprising fact in the extensive folklore that surrounds the figure of Cortez is that his outlawry lasted only ten days. Action-packed though those ten days were, they would perhaps only have given rise to such a legend in a region like the Border. While the existing legendry of Cortinas was strong in the years immediately after the earlier bandit’s death, the discontents and tensions that originated the legend and kept it alive were also still smouldering.

The incident that turned Gregorio Cortez from an obscure small farmer and vaquero was not unlike that which had set Cortinas upon his influential path. Nor was it unlike the situation in other places, such as Australia, where stock theft was the background to many bushranging outbreaks. Cortez and his family had been involved in stealing horses, which explains why Sheriff W Morris and two deputies wanted to question him about a missing horse one day in June, 1901. The lawmen arrived at the small plot Cortez and his brother, Romaldo, rented near Kennedy. According to the court evidence there were language difficulties during the questioning which led the Sheriff to draw his pistol and fire on the brothers, wounding Romaldo. Cortez returned fire and killed the Sheriff.[i] Cortez fled on foot and began walking towards Austin, eighty miles away.

A manhunt was quickly initiated and Cortez’s wife and children, his mother and sister-in-law were illegally gaoled, a tactical error frequently made by authorities during episodes of outlawry. During the manhunt Cortez shot and killed another two lawmen and embarked on another walking feat, this time a 100-mile journey from Belmont towards Laredo. With the newspapers referring to Cortez as ‘an arch-fiend’ and a $1000 reward on his head, Mexican-Americans instead saw Cortez as one of their own making a heroic stand against American oppression and injustice. At the same time, Anglos in a number of towns rioted and a number of Mexican-Americans were killed. Despite this there was some admiration in the English language press for Cortez’s endurance and his ability to elude pursuers through his excellent knowledge of the country. Eventually he was captured on June 22, 1901 when a friend led the posse to his hiding place. The Judas in this case was the ironically named Jesús González, later vilified by some Mexican-Americans as a traitor.

There followed a number of trials and verdicts and a lynching attempt on Cortez. He eventually began serving a life sentence for the murder of the Sheriff in 1904. Cortez had become a cause celebre, his case attracting attention throughout the Hispanic world. Agitation for his release continued until 1913 when he was freed on a conditional pardon. He then fought in the Mexican revolution and died of pneumonia in February 1916.

The legendry of the man ‘with his pistol in his hand’ is extensive and still powerful in the folk traditions of the Border. Américo Paredes documented and interpreted these, noting his Robin Hood-like attributes:

In some of his feats the Cortez of the legend resembles folk heroes like Robin Hood. Like Robin he surprises his enemy and provisions himself from them, taking food, arms, and other necessaries and letting them go unharmed. In a way reminiscent of Robin Hood, Pancho Villa, and the Saxon King Alfred, Cortez comes into town in disguise while the chase after him is on, mingles with the townspeople and listens to the tales told about him.[ii]

The corrido of Gregorio Cortez, in its numerous variants, concentrates mainly upon the bravery of Cortez in the face of the hated Texas Rangers, the rinches:

With his pistol in his hand,

In 1982 a feature film on the outlaw’s life and legend reached the silver screen, as the mass media picked up on another suitable storyline. This was just another stage in the evolution of the Cortez legend, one that graphically demonstrates the interaction of fact and folklore, as noted by Paredes:

… one of the most striking things about Gregorio Cortez is the way the actual facts of his life conformed to pre-existing legend. In his free, careless youth, in the reasons for his going outside the law, in his betrayal, his imprisonment, and release and even in the somewhat cloudy circumstances surrounding his death – the actual facts of Cortez’s life (so far as we know them) follow the Border-hero tradition that was already well established before Cortez made his celebrated ride.

Paredes goes on to describe how the facts of Cortez’s life fitted the outlaw hero legend, and vice versa:

It was as if the Border people had dreamed Gregorio Cortez before producing him, and had sung his life and deeds before he was born.[iv]

The brevity of his outlaw career meant that Gregorio Cortez had little time to generate and nurture a Robin Hood reputation for himself. Nevertheless, his legend developed quickly among his supporters and sympathisers. He is compelled to go outside the law by unjust treatment; he acts only against the representatives of the oppressive American laws; he skilfully eludes his pursuers and is finally betrayed by a friend. He is certainly brave, even though he does not die game. In the circumstances of his time and place, even his ten-day defiance of authority was sufficient to turn him into an outlaw hero among the disaffected Mexican-American population of the border region.